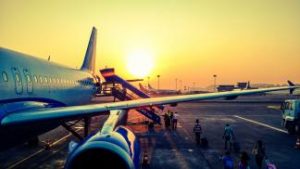 Team of researchers at Kaunas University of Technology (KTU), Lithuania are designing an innovative device, which will increase aircraft safety during takeoff. During the first 10 seconds of the takeoff roll, the device predicts if the aircraft will reach the sufficient speed for taking off. The idea behind the innovation can be adapted both for small aircraft and large jets.

According to statistics provided by Boeing, but including all airliner accidents, 13% of fatal aircraft accidents occur during takeoff. One of the biggest challenges for the pilot is, when something bad happens during a takeoff roll, to decide whether to continue the takeoff and deal with the problem during the flight, or to stop the aircraft.

Being a pilot himself, he is familiar with official regulations, which indicate what length of runway is needed for an aircraft of certain weight, under certain weather conditions. However, these regulations are useful only when everything goes well: when the engines are working on their full capacity, when there are no unexpected failures, sudden weather changes or other disturbances. When something goes wrong, a pilot might make a mistake in assessing the acceleration of the plane, and fail to understand that the length of the runway is too short for the aircraft to reach the speed needed for safe takeoff.

“If the aircraft’s engine is not working properly, if the cross or back wind component is too big, the air is too humid, the takeoff field is too rough, slippery or wet, the pilot is left to rely on his or her subjective opinion whether the aircraft will reach the required speed for takeoff in the given distance or not”, explains Dr Pagodinas.

That is how the idea to create a device, which would objectively assess the factual acceleration of an aircraft during the start and, coordinating the data of accelerometer with the runway length, would calculate the prospect of safe takeoff, came to life. The device would also inform the pilot if the aircraft couldn’t proceed to safely accelerate.

Together with KTU Professor Vytautas Dumbrava, Dr Pagodinas is designing a device, which during the first 10 seconds of the takeoff roll calculates if the aircraft will reach the required speed under current conditions. According to Dr Pagodinas, in total the takeoff

takes up to 40 seconds; if the device predicts failure, the pilot still has time to stop the aircraft.

The portable device created at KTU uses the parameters of the aircraft accelerometers, and the pilot of light or ultralight aircraft has to enter 5 additional parameters: magnetic course of the runway, wind direction and speed, approximate length of the runway, and the takeoff speed (or, in aviation terms, v1 speed). The device is turning acceleration into speed, speed into distance, and while the aircraft is rolling on the runway its location and the possibility to take off is being calculated.

“The innovative meter can be useful for all aircraft, where even small change of direction or speed of wind or other conditions is of critical importance”, says Professor Dumbrava.

According to researchers, although the current autonomic device, which has been prototyped and tested is designed for small private planes, the same idea can be adapted to all aircraft, including large jets flying on commercial routes.

“The system could be easily installed in contemporary passenger aircraft, such as Boeing, Airbus, Embraer and similar. This would not involve any additional sensors, just a special software, which would compare the plane’s factual speed at the start with the defined speed profile, stored in the memory of the aircraft computer. If the real speed profile was not matching the defined one, the system would send an alarm signal”, says Dr Pagodinas.

KTU researchers are hoping to find a company, which would be interested in cooperation to test the software in their flights.

“Our innovation would increase safety of air travelling. Aviation history is recorded in blood as new safety requirements are implemented only after analysing the reasons of fatal accidents. I have had numerous conversations with experienced captains having ten thousand hours of flight experience, and they are convinced that an objective system, which informs about takeoff conditions is needed”, says Dr Pagodinas.

At the moment, the researchers are aiming to obtain a patent for the device and method for defining a safe aircraft runway distance. The initial priority patent application for this invention is submitted to the Lithuanian Patent Office on March 5th, 2018 (Application No. LT2018 509). Commercialisation of the product is facilitated by KTU National Innovation and Entrepreneurship Centre – one stop shop for knowledge intensive business to contact research.